It was never the simple job it looked to be – stacking would go well until we had 90% of the load aboard, then things got sticky. 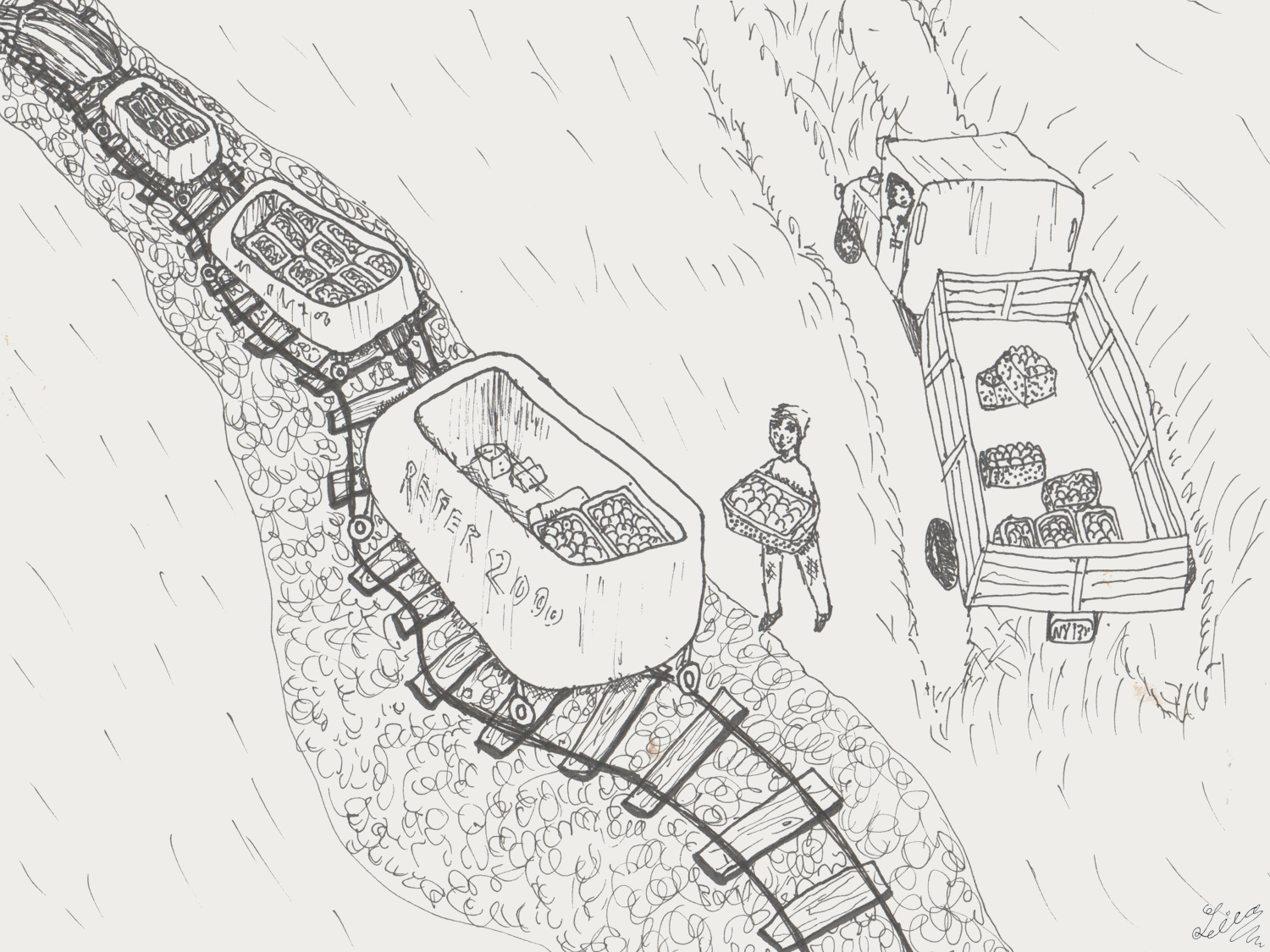 EVERY NIGHT during harvest time, every night about 9 o'clock, the local on the Southern Railroad would come chugging in from Centralia. They'd hook onto the cars we'd already loaded with fruit and spot some empties on the siding, enough empty reefers to handle both us and Gage & Hawkins the next day.

A reefer wasn't really a refrigerator car in the sense we mean today, it didn't have any mechanical refrigeration like the Fruit Growers Express cars you see today; a reefer back in those days was really just a big ice chest. At either end there was a big compartment that would hold about a dozen 300-pound chunks of ice, and there was an air circulation deal set up so that the ice in these ends would cool the fruit. The reefers that were switched off at the Dix siding already had their 3 tons or so of ice.

Usually we packed out three or four cars of fruit a day, and Gage & Hawkins did about the same. Yellow Transparent started the season, and then Duchess right behind Yellow Transparent; about three weeks after Duchess came our Elberta peaches, and then our Jonathan and Grimes Golden, Rome Beauties and finally Winesaps.

Bert McBride was the key figure in our reefer loading. Bert had a 2-ton flatbed truck that he backed up to our loading dock at the packing shed about ten o'clock in the morning. Bert had a big belly and a weak back, so his contribution to our enterprise was to back his big green truck up to the loading dock, get loaded, drive a mile up to the railroad siding at Dix, back up to the car, and then keep his meerschaum pipe going while someone else handled the 50-pound baskets of fruit.

A reefer wasn't really a refrigerator car in the sense we mean today... a reefer back in those days was really just a big ice chest.

How cool it was in an iced car, a cool haven from the heat of July and August there at Dix. Southern Illinois was a hot place to be in midsummer time, and a reefer was a place of escape. I liked to ride up to the siding with Bert McBride just to get cool, and in Elberta season to get away from the peach fuzz in the shed for a while.

At the packing shed, one man was assigned to load the packed bushels onto Bert's truck. He'd stack the baskets until the truck was three-high full. Bert would lash down the load. Usually two men would go with Bert to the siding at Dix, two men, one a stacker, one a feeder. There was a considerable art to stacking, because each car was supposed to carry exactly 396 bushels of peaches, stacked three high, or 508 bushels of apples, four high. The yellow United Fruit Express cars were OK — you could count on them being the same from one to the next — but there were differences from fleet to fleet, and the stacker had to be able to take into account those little differences.

His contribution was to back his big green truck up to the loading dock... and keep his meerschaum pipe going while someone else handled the 50-pound baskets of fruit.

Stacking would go well until we had maybe 90% of the load aboard, and then, as we "stacked out the door," things could get a bit sticky. The general idea was to have everything in so solid that the bushel baskets of fruit would not wiggle and shift en route and the fruit would not be bruised by all that jostling. So the stacker had to make constant allowances to get his load to come out just right at the door. At the other end — Boston or Toronto or Rochester or Halifax or some other unknown faraway town — at the other end, some buyer would be opening up the baskets right at the car door to get a sampling of what we were shipping. Bruises there would be disastrous for pricing of the whole load of fruit.

I was 16 already before I stacked out my first carload of apples. I was 16 and sure I could do the job at least as well as our regular stacker. But when I came to "stacking out the door," I lacked 6 inches to have enough space to fill out my 508 bushels, and no way could I find the slack. Every bushel basket of apples in that load I had to shift again, unload first into one end and jam every basket in a little more tightly, then the other end. I made it eventually, three hours maybe to redo the stacking, and this time it came out the door just right.

Loading a reefer was never the simple job it looked to be.