When a customer came calling, Grandmother would head for the special pen of young chickens. She had a special chicken-catcher. 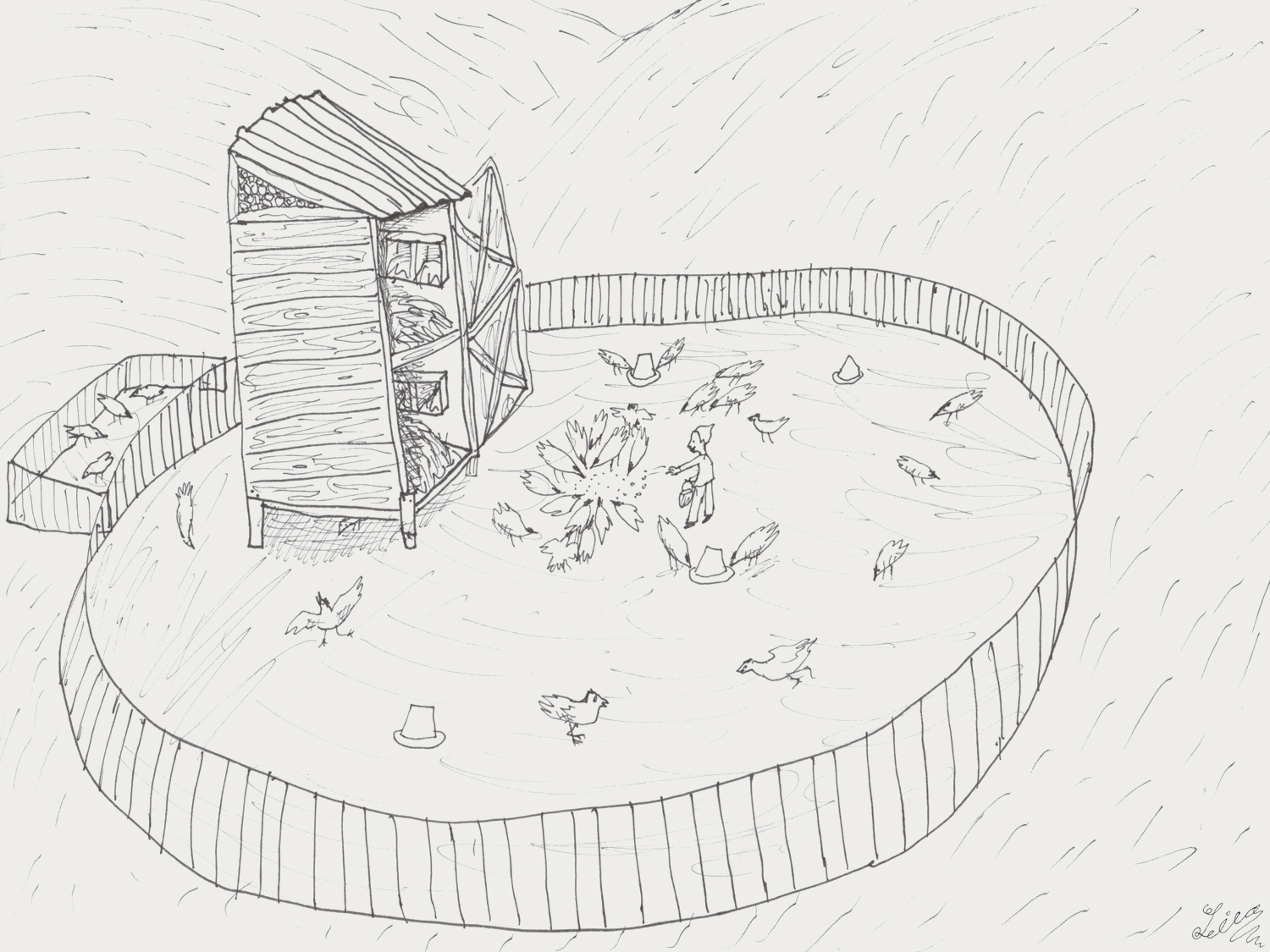 GRANDMOTHER'S CHICKEN HOUSE was the one sure-thing, can’t-lose, all-profit unit on our family farm.

Grandmother had about an acre of fenced-in chicken yard. Free range, so that as soon as a grass shoot showed itself, a chicken was waiting to gobble it up. Those new chicklets went into a special fenced area, tucked away so the older hens couldn’t peck at ‘em.

Grandmother's chicken house was the one sure-thing, can’t-lose, all-profit unit on our family farm.

One of my everyday, after school jobs was to keep the water fountains filled with clean water. Half a dozen of these 2-gallon galvanized waterers, scattered around the chicken pens. Pump water by hand at the trough, lug it to the waterers. I often had to dump out the leftover water —chickens messed up their water most times.

Feeding was only partly chickenfeed. Ground wheat mixed with a bit of ground soybean meal, maybe some tankage too. This went into feeders; special store-bought mix for the young chicks. But the fun part was shelled corn. Grandmother would carry a peck basket of yellow corn out into the chicken yard, calling “Chick! Chi-ick! Here, chi-ick!” and tossing handfuls of grain out on the ground. All the old biddies would come a-running at first call.

For the older hens, and later for the pullets too, the only duty was to lay eggs. Grandmother’s chicken house was a two-story relic. Maybe fifty or sixty straw-filled nesting boxes lined along the walls. Somehow those hens seemed to know that that’s where egg-laying should be carried out. Usually collecting eggs each evening was the most fun of chicken farming. Usually— but come spring, many of the old layers would get “broody,” insist on “setting” on eggs; these old girls would defend their positions with never-gentle pecking. Twice a week Grandmother would take her collected eggs up to Ervin Hawkins' store in Dix.

One dollar for a dressed chicken. Ten cents a dozen for eggs. Doesn’t sound like much nowadays, but back then a day-laborer earned one dollar for a ten-hour day. A new Pontiac coupe cost about $350.

Those baby chicks that had started out under the brooder and then transferred to the special pen outdoors could hardly have guessed their futures. When just a few weeks old, about half these little fluff balls began to sprout prominent red combs atop their heads. By the time the flock was about 12 weeks old, these little roosters would weigh in at perhaps two pounds—and they were ready for harvest.

Now Grandmother had a great fryer business. When a customer came calling, Grandmother would head for the special pen of young chickens. She had a special chicken-catcher, a six-foot length of 12-gauge wire with a sharp crook at one end. Grandmother would go stalking through that pen till she spotted just the right young rooster, then that chicken-catcher wire would strike out, a rooster would be snagged by one leg, and Grandmother would haul him in. Sometimes the customer would take the live chicken home for frying next day, but most often Grandmother would process the chicken. First, off with his head (hatchet on a stump). The headless corpse would flop around the yard for a couple of minutes. Then Grandmother would dip it into boiling water, strip off the feathers, and gut the naked remains.

One dollar for a dressed chicken. Ten cents a dozen for eggs. Doesn’t sound like much nowadays, but back then a day-laborer earned one dollar for a ten-hour day. A new Pontiac coupe cost about $350. Times were different.

Not so much money per transaction, perhaps, but Grandmother had no expense; her gross income equaled net profit.

Chicken farming can be a high-profit enterprise!