The brown marmorated stink bug (Halyomorpha halys), or BMSB, is a pest that is most problematic on the East Coast. It probably arrived in America in the 1900's, and it appeared in New York in 2007. It is invasive, prolific, and especially destructive because it feeds indiscriminately on a wide range of commercial crops. The adult BMSB can fly, but it prefers to hitchhike. It has the typical shield shape of other stink bugs, and the upper surface of the abdomen is brown. It can be distinguished from other, native stink bugs by the striped outer edge of its abdomen and the alternation of light and dark banding on its feelers. The adult overwinters in protected areas, often homes, where it is nothing more than a smelly nuisance if accidentally crushed. In spring, females lay eggs in clusters of 20-30, with a single female laying as many as 486 eggs in her season. The white-green eggs are laid on the undersurface of leaves, and the newly hatched nymphs will disperse and begin feeding. This is done by piercing plant tissue, injecting saliva, and extracting liquid.

The damage inflicted on a plant by BMSB feeding can appear as pitting and scarring on fruit surfaces, necrotic flesh, and stippling on leaves, and the wounds created by feeding can also provide access to pathogens. Pome fruit are especially vulnerable to BMSB damage.

You can monitor the density of stinkbugs in your orchard with traps. Clear guidelines for management of this pest have not yet been established, but in recent years some research has been done on the deployment a predator species of wasp, which goes by the intimidating name Samurai Wasp. 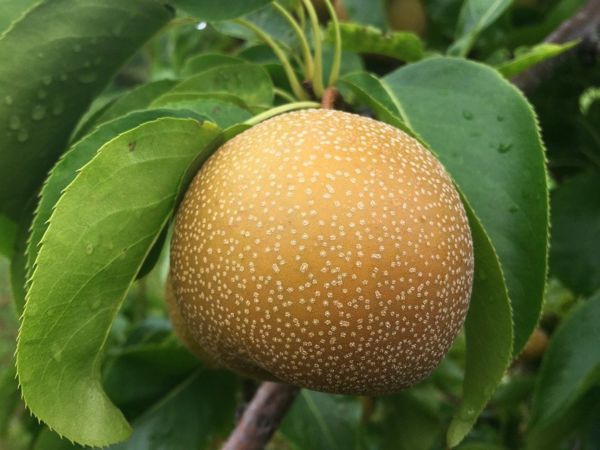